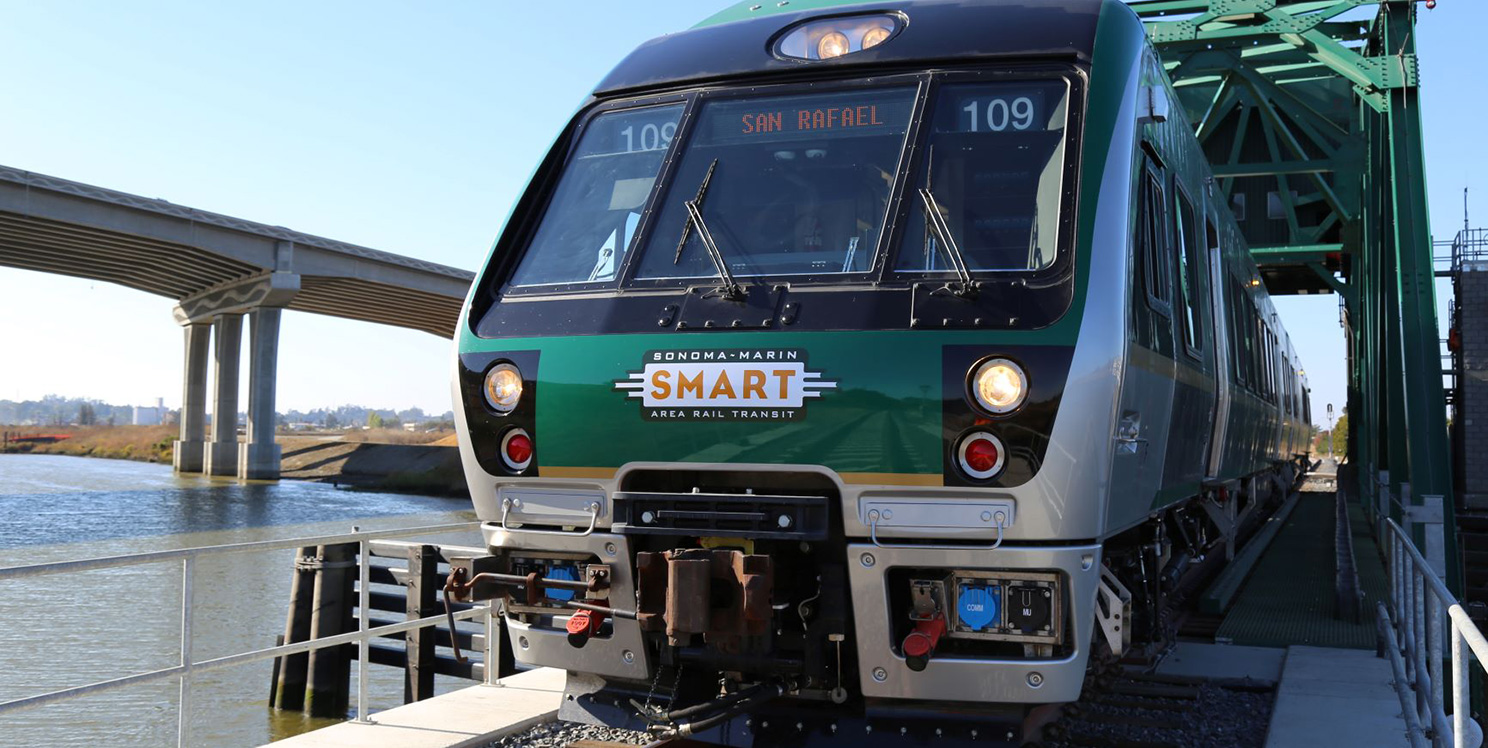 The Sonoma-Marin Area Rail Transit (SMART) Train provides a fast and efficient way for Petaluma day trippers to enjoy some of the best scenery and sites the North Bay has to offer. It first began offering passenger rail service within and between Sonoma and Marin counties in August of 2017. The downtown Petaluma station is only two miles from The Cottages of Petaluma. You can board from 220 Lakeville St. in downtown Petaluma.

The SMART Train’s current 43 miles of rail corridor includes 10 stations from the Sonoma County Airport to Downtown San Rafael. Each modern, sleek two-car SMART Train can carry more than 300 people, 40 plus bicycles and has a concession stand on board. Fares are variable, depending on the distance traveled. They currently range (for seniors) from $1.75 to a maximum of $11.50 per trip.

There will soon be a line extension from downtown San Rafael to the Larkspur Ferry Terminal. When that section is completed, riders will be able to go carless all the way to downtown San Francisco. Also planned is an extension northward into the lovely wine country towns of Cloverdale, Healdsburg and Windsor.

Here are some of the current stations, where stopping off can offer a full day of enjoyment:
Santa Rosa Downtown – The Santa Rosa Downtown station is within easy walking distance of Santa Rosa Plaza. Located in the heart of downtown Santa Rosa, nestled between recently reunified Courthouse Square and Railroad Square, Santa Rosa Plaza bills itself as the premiere shopping destination in Sonoma County and beyond. A little further east is Santa Rosa’s historic Old Courthouse Square, with many options for outdoor dining. Luther Burbank Home and Gardens is also within walking distance of the station. If you would rather stroll in nature than dine or shop, the Santa Rosa Creek Trail, with views of waterway, farms, vineyards, and mountains, is less than a block away.

Marin Civic Center – The Marin Civic Center Station provides easy access to the beautiful, Frank Lloyd Wright designed Marin County Civic Center, a national- and state-designated historic landmark. You can sign up for a docent-led tour. On Thursdays, the nearby Civic Center Farmers Market overflows with local bounty from throughout the region.

San Rafael – The downtown San Rafael station on 3rd Street is a short stroll away from dozens of unique restaurants and breweries. You can also visit the rebuilt Mission San Rafael Arcangel, founded on December 14, 1817 by Father Vicente de Sarria. The mission museum contains artifacts, paintings and other objects for public viewing including three of the original bells from the mission.

Whichever day trip you decide to take, just riding the train is an enjoyable experience!